Anyone who’s ever worked in a hostel has met a guest that during checkout says something like, “Wow, I’ve never stayed at a hostel. I thought they’d be dirty or scary like the horror movie. We had such a good time, I’m definitely going to stay at a hostel again.” This is music to my ears. Another person converted to the magic of hosteling!

Now here’s something you haven’t heard unless you’ve worked in America. A guest checks out and says. “I stayed at hostels all the time when I was in Europe but I didn’t realize we have hostels here in the U.S.” This can be confusing. Hostels are all over the world, but it works a little differently in the United States. Today I’ll tell you a little bit about the US hostel industry and how its changing.

Before I jump in, allow me to introduce myself. My name is Byron Bunda and I’m the founder of American Hostels, an organization that aims to unite all the hostels in the United States. If you work in the US hostel industry, this is going to be really interesting for you. If you don’t, check out my blog BackpackerBiz. I write about topics related to hostel management. The news and ideas we cover there are not specific to the United States and might be more helpful to you. Moving on…

What is American Hostels?

I started American Hostels after spending a year working in the Australian hostel industry. Down in Australia they have a great organization called Hostels Australia that links the best independent hostels in the country, advertises them to travelers, and gives those travelers a discount when they book them directly. It’s helpful for hostels because Hostels Australia teaches travelers that there are great hostels to discover in places that they may not have originally planned on visiting. The brand is also a mark of quality for the hostel that gives travelers an extra reason to choose them. Lastly, it’s also nice to encourage guests to book directly and help both the traveler and the hostel save money. I realized after my year in Australia that this concept would be great for hostels and travelers in the USA too. When I looked further into it, I quickly realized Australia isn’t the only country where hostels are united. There are organizations around the world, from Germany, Latin America, Israel, and many, many more. It’s time for the United States to follow their example!

How’s it going so far?

Right now my job is to spread the word about American Hostels across the country. We’ve had more than twenty hostels join so far and we’d love to give travelers even more quality hostel options. Besides showing America’s best hostels to travelers, we also want to bring the hostels together. Conferences like HostelSkills do a great job of bringing hostels together to connect and learn from one another in Europe. We want to connect American hostel owners and employees, not only at in-person events, but also through our online community. When you own a hostel you can’t ask Google to answer all your questions. Sometimes it’s best to ask other hostels. This is really important, especially for newer hostels, to be able to learn from the experience of other hostels. Also, the hostel industry constantly shifts, so even experienced hostels that have been open for decades can still learn new skills. American Hostels is creating this place to learn.

Challenging the American perception of hostels

Besides showing the best of America’s hostels to travelers, our goal is also to change the way all Americans think about hostels. Most Americans are not aware of what a hostel really is. Most people frequently people think about old, dirty, plain hostels from decades ago. They don’t realize hostels can be as new and luxurious as a five-star hotel, but even more fun. Some Americans think about the famous horror movie Hostel. They get nervous about the idea of sharing a room with strangers because they’re worried about their safety. Until they stay in a dorm they don’t realize that most hostels are full of travelers just like them, interested in exploring a new place on a budget and making new friends. In fact, because most Americans don’t understand the word “hostel,” some hostels are choosing to use different words to describe themselves. Generator Hostels is very successful in Europe and they just opened their first US location this year. To quote their Chief Marketing Officer:

“There’s a very negative connotation toward the word ‘hostel’ in the American market, irrespective of what your product offering is. If it has the word ‘hostel’ in it, there will be negative connotations. In Europe, hostels are the go-to place for Millennial travelers, so it’s a very tricky situation of how we position ourselves in Europe to how we position ourselves in the U.S., and that’s something we’re trying to bridge.”

Making America an easier place to start a hostel

We also would like to change the way our politicians, banks, and government think about hostels. In most cities in America they don’t recognize “hostel” as a type of business. Most cities use other labels like hotel, bed and breakfast, vacation rental, or boarding house. This can cause difficulties for entrepreneurs interested in opening hostels in new cities because the hostel doesn’t fit into the mold of another business. This makes it difficult to get financing to start a hostel, or a permit to open a hostel. For example, a hostel in Richmond, Virginia had to install a 3-compartment sink, the type that’s meant for kitchens in restaurants, because the city didn’t approve of using a residential kitchen sink inside of a commercial building. I was pretty confused when I visited that hostel and didn’t know how to wash my dishes! The easier it is for hostels to open in new cities, the better it will be for all American hostels. We want budget travelers to be able to get all around the country, jumping from hostel to hostel.

If you’re an owner or an employee for an American Hostel, please contact me at info@americanhostels.us. We want to connect with all U.S. hostels so I promise you’ll get a reply. If you work in the hostel industry outside the United States, check out my blog related to hostel management issues. Every week I post hostel news and ideas and it’s not specific to the US market. Thanks for reading! 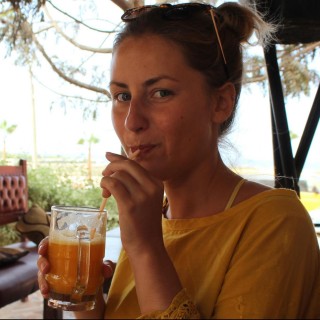 Hi! My name is Ewa and I'm a hostel traveller, originally from Poland. During slow travels, I have fallen in love with working in the hostel industry. Now I create content for hostels and show you why they are a unique accommodation.
Currently, you can find me living in Barcelona, Spain.

Stories from the hostel work

Managing Your Online Reputation Has Never Been Easier - 21 Feb , 2020

The Ultimate Guide To Property Management System and Channel Manager [for hostels] - 04 Feb , 2020